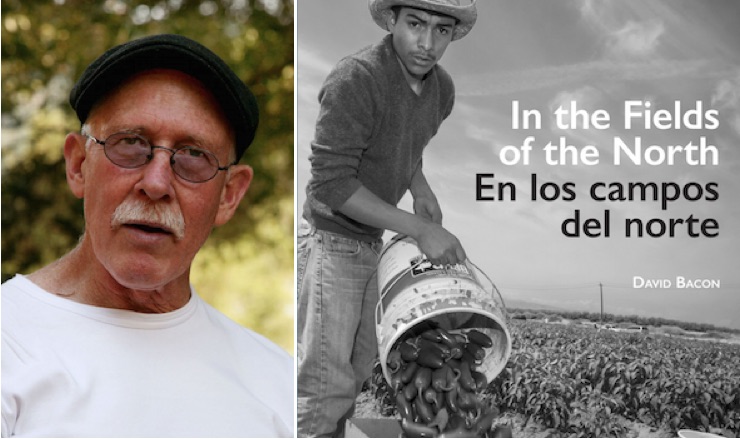 David Bacon is Thorne Dreyer's guest today on Rag Radio. David's acclaimed new book -- totally bilingual -- is In the Fields of the North: En los campos del norte. The book includes more than 300 photos and a series of personal narratives that bring a little known or understood universe to life.   Bacon is a California-based writer, documentary photographer, and longtime union organizer. The author of several books about migration, Bacon was a factory worker and union organizer for two decades with the United Farm Workers, the International Ladies Garment Workers, and other unions. Today, he documents the changing conditions in the workforce, the impact of the global economy, war and migration, and the struggle for human rights. David does not characterize himself as an objective journalist, but rather as an unabashed advocate for social change.  This is David Bacon's fourth visit to Rag Radio. Find the earlier shows here.About this book: "A new bilingual book by David Bacon offers both a dramatic antidote to the deplorable reality of racism and a majestic life-affirming view of these hidden women, men and children. In the Fields of the North is a landmark fusion of journalism and documentary photography. -- Paul Von Blum, Truthdig "David Bacon renews and updates the progressive documentary tradition with these extraordinary, carefully chosen portraits of farmworkers, their families and communities." -- Mike Davis, author of City of Quartz and Magical Urbanism    "In this landmark work of photo-journalism, activist and photographer David Bacon documents the experiences of some of the hardest-working and most disenfranchised laborers in the country: the farmworkers who are responsible for making California 'America's breadbasket.' Combining haunting photographs with the voices of migrant farmworkers, Bacon offers three-dimensional portraits of laborers living under tarps, in trailer camps, and between countries, following jobs that last only for the harvesting season. He uncovers the inherent abuse in the labor contractor work system, and drives home the almost feudal nature of laboring in America's fields." -- University of California Press Rag Radio is produced in the studios of KOOP 91.7-FM, an all-volunteer, cooperatively-run, solar-powered community radio station in Austin, Texas, in association with The Rag Blog and the New Journalism Project, a Texas 501(c)(3) nonprofit. The host and producer of Rag Radio, Thorne Dreyer, is a prominent Austin-based activist and writer who was a pioneer of the ’60s underground press movement. The show’s engineer and co-producer is Tracey Schulz and the staff photographer is Roger Baker. The syndicated show is broadcast (and streamed) live Fridays, 2-3 p.m. (Central) on  KOOP, and is later  rebroadcast and streamed on WFTE-FM in Mt. Cobb and Scranton, PA., on Houston Pacifica's KPFT HD-3 90.1, and by KKRN, 88.5-FM  in Round Mountain, CA -- and as a featured podcast at Veterans Today Live.